You are here: Home / About Us

This institution, primarily for girls and women was founded during the peak days of the national movement in mid 1930’s by late Smt. Shakuntala Ji and Shri Moolchand Shastri. Mr. Shastri was honourd by by U.P. Legislative assembly in November 1992 for his distinguished contribution to public life in many ways including education. 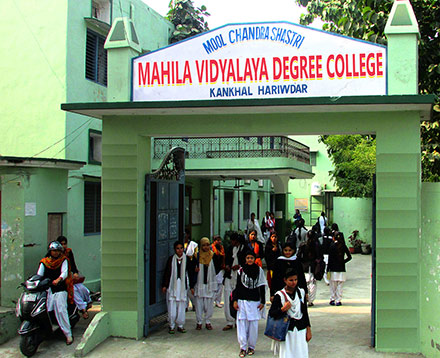 Started as an oriental school for women, in 1939 government (the then British) recognition was sought as Gandhi Ji relaxed his stringent against all British institution and allowed partial interaction with government education in anticipation that Britishers may transfer power to Indians as they have announced during early phase of IInd world war.

After over two decades of consolidation of girl’s education upto intermediate level, recognition for degree classes were sought and as such Agra University, Agra allowed recognition for B.A. classes in humanities with six subjects. Undergraduate Degree College had nine lecturers and a Principal and the college soon was a beneficiary of state funding in terms of salary disbursement to teaching and non-teaching staff. The college was also recognized by the UGC as under 2(f) and 12 (B) of their act and got some under graduate grant as well.

A major policy departure took place in 1992-93 as both Central and State Government’s adopted a policy under which neither the new recognized colleges (after 1993) nor addition of new departments in the aided college shall get financial support terms of grants. Consequently emerged the concept of self finance.

Hence, after 1995 some professional and P.G. courses were started in self-financial format. Masters in Political Science, Home Science and Music, B.Com and M.Com as well as B.Sc. Home Science and M.Sc. Home Science in Science esteem also got recognition under academic ladder. Professional courses such as P.G. Diploma in Food and Nutrition and B.B.A. are also conducted effectively by qualified and committed faculty members and technical staff. Nearly 500 women students are enrolled in various professional or P.G. courses in self-financial format.

In this pioneer institute of women and girls education some 700 to 800 students are seeking education in B.A. (Humanities) level which is funded both by the State Government and partially by UGC’s undergraduate schemes of grant. In this context the college in uploading detailed information regarding aided i.e. B.A. (Humanities) registered in, UGC record’s as ‘Mahila Vidyalaya Degree College’. UGC’s inspection team may be requested to take a note of the self financial format also.

The vision, mission and objectives of the college are communicated to the students and staff as follows –

The vision, mission and objectives of the college is communicated through prospectus. Besides every year orientation programme is organized at the commencement of each academic session. The students are introduced to various programs, activities, facilities and other rules and regulations of the institute are conveyed to the girls immediately after the admission. Also frequent meetings are held between Principal and teachers to plan and discuss key issues with respect to vision and mission of the institution.